7 Harry Potter Concepts That Actually Exist, Thanks To Science By Varia Fedko

When the Harry Potter book series first burst into our lives, nothing could prepare us for the whirlwind of magic and adventure simmering at heart of J. K. Rowling’s wizarding world.

We immediately fell in love and spent many a summer waiting patiently for the arrival our letters inviting us to Hogwarts School of Witchcraft and Wizardry. Yet, deep down, we always knew that Harry Potter and his world would always remain mere fiction.

Fast forward to 2016, and although this fact remains, there’s no denying that magic does exist in our simple Muggle world. Here are 7 Harry Potter concepts and objects that you can find beyond the realms of Rowling’s imagination, all thanks to science and technology: 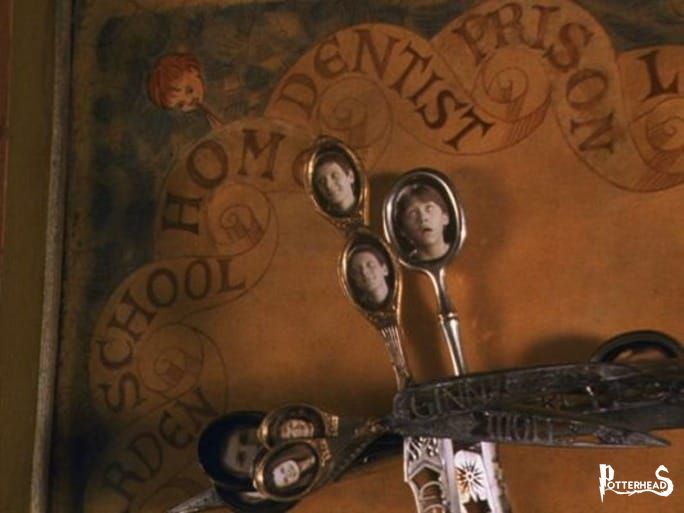 « “It was completely useless if you wanted to know the time, but otherwise very informative. It had nine golden hands, and each of them was engraved with one of the Weasley family’s names. There were no numerals around the face, but descriptions of where each family member might be” — J. K. Rowling »


While you probably wouldn’t want to make your location public knowledge and accessible to the next random, when your whereabouts are in the safe hands of your concerned family members, that’s another story. 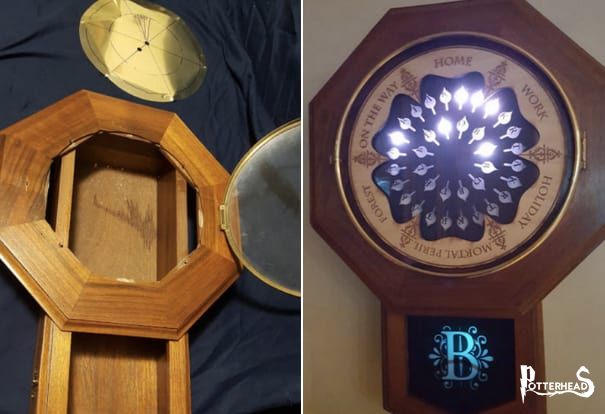 A team of university students in Germany bought a clock, changed-up the gears and added a micro-controller. They were then able to track housemates or family members via a mobile phone app corresponding to the various dials on the device.

Although this is ultimately a great idea, it’s unclear as of yet how someone could be tracked if they are in “mortal peril.”


“There was a big photograph on the front of a very good-looking wizard with wavy blond hair and bright blue eyes. As always in the wizarding world, the photograph was moving” – J. K. Rowling
We see moving billboards all the time now, but how incredible would it be if the people in hard-copy newspapers and magazines could move too? Well, rest assured that strides in that direction are certainly being made. For starters, we already have picture frames that can decorate our Muggle homes with subtly-moving images so it’s only a matter or time that the technology goes mainstream.

While we wait for that moment though, we’ll just have to stick to the next best thing and that’s those wonderful, little creations called “gifs.” 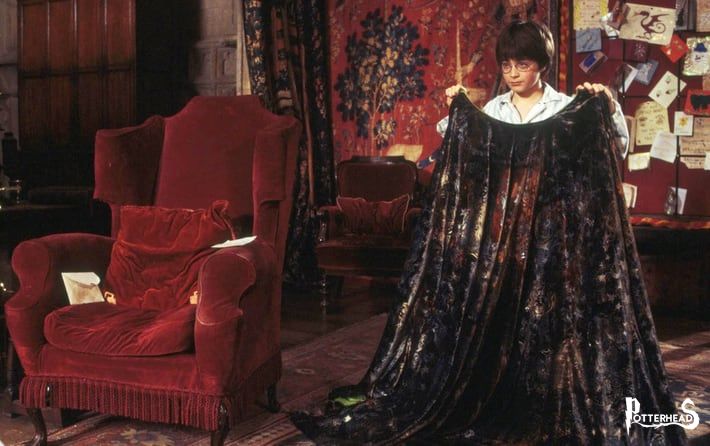 “Harry looked down at his feet, but they were gone. He dashed to the mirror. Sure enough, his reflection looked back at him, just his head suspended in midair, his body completely invisible. He pulled the cloak over his head and his reflection vanished completely” – J. K. Rowling
Science has been slaving away to create a real version of some kind of invisibility device for years now, allowing someone to vanish from sight in an instance by draping a piece of cloth over themselves. One of Harry’s most prized possessions, it first pops up in Harry Potter and the Sorcerer’s Stone when he is gifted the magical garment anonymously by Albus Dumbledore in 1991.

A handy item, the Invisibility Cloak helped Harry, Ron and Hermione sneak around Hogwarts unnoticed over the entire book series and now, slowly but surely, a similar kind of substance is being worked on in our humble, little Muggle world. Well, kind of.

Recently, experiments with photo-thermal deflection have been used to create a “mirage” effect. Scientists heating carbon nanotubes using electricity have found that light tends to bend around them, essentially making them “invisible.” By turning the heat on and off, the tubes appear and disappear, over and over again.

Give the scientists over at the University of Texas a few more years and they will probably upgrade this process to human-sized materials that we can use to break into banks. Wonderful. 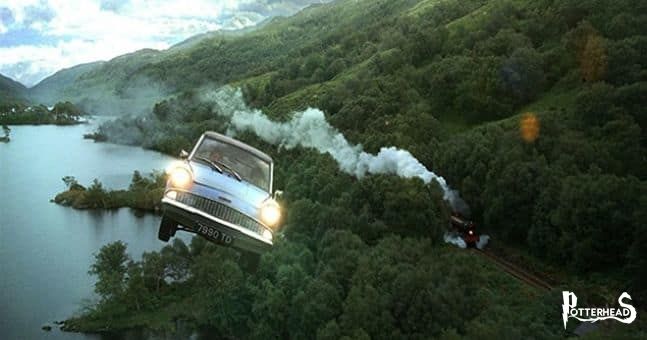 « “The things our lot has taking to enchanting, you wouldn’t believe…” – Arthur Weasley »


Wouldn’t you just love to make a grand entrance by swooping in on a flying car once in a while? Well thankfully, recent technology developments may mean that this possibility is crawling closer and closer with each year.

The military is apparently trying to create a flying truck known as the Textron transformer, also described by engineers as the “Air Hummer.” Although it probably doesn’t quite reach the rustic elegance of the Flying Ford Anglia, the vehicle will essentially serve a similar purpose. When they finally hit the mainstream market decades from now though, unlike Ron, make sure you actually know how to drive.


As proven by the creator of the Weasley Clock, GPS really can do wonders these days. Some may even go as far to say it has truly magical capabilities.

In the books and movies, you might remember the Marauder’s Map document revealing every corner of Hogwarts and every inch of its grounds to its possessor (bar a few restricted areas like the Room of Requirement, of course). Yet, what you might not have realised is that some clever Muggles have been using similar tracking technology for years.

For example, there’s now a simple Internet browser extension that can basically now do the same thing by tracking the locations of all the friends you chat with on Facebook Messenger in one place (a bit like The Weasley Clock, I guess). Alternatively, many cell phone companies have also been offering premium packages that track family members and show their locations on clever, little maps.

So quite frankly, if you don’t want eyes peepin’ at where you’re at, turn off your location services right now – you never know who’s going to be snoopin’. 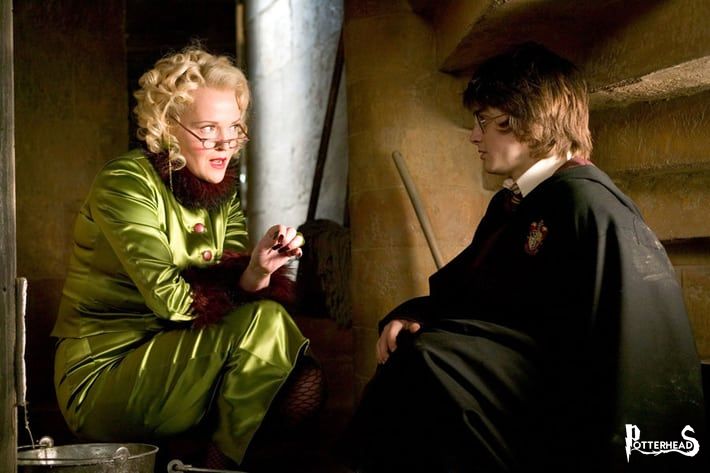 « “Hey….my eyes aren’t ‘glistening with the ghosts of my past’!” – Harry Potter on Rita Skeeter’s quill »


If you’re like me and have major struggles with maintaining barely passable handwriting, a Quick Quotes Quill would be the perfect solution. And thankfully, it exists.

Channel your inner Rita Skeeter by getting to grips with a magical pen that memorizes whatever someone is saying, before writing it down. Rest assured though that unlike Rita’s quill, this voice-to-text technology doesn’t take someone’s words and twist them to create sensational and wildly inaccurate tales: 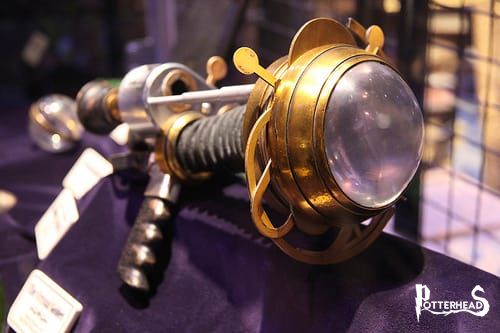 « “You can replay action … slow everything down … and they flash up a play-by-play breakdown if you need it. Bargain – ten Galleons each” – A wizard at the Quidditch World Cup »


Indeed, the Muggles over at Sony have certainly stepped up their game and created one of the most incredible pieces of technology in recent years — our very own version of the Omnioculars.

In Harry Potter, the binoculars were able to magically slow down and replay action, making them perfect for fast-paced Quidditch tournaments. There are so useful in fact that they can even provide their user with a detailed run-down of what’s going on (which, if you have an attention-span of a fly like me, is pretty awesome!) 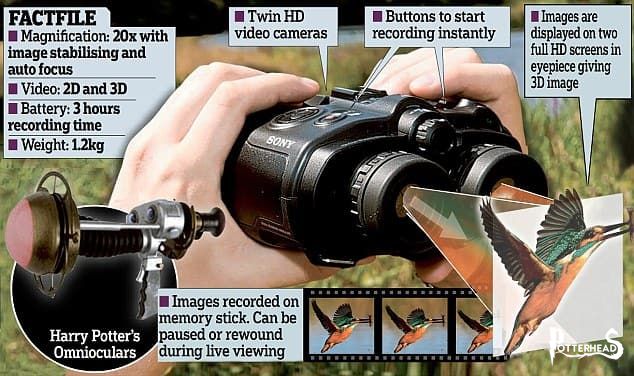 Although Sony’s version can’t do the latter, their “Vinoculars” can pause, rewind and re-watch moments. You can also record whatever is happening to re-live later, making them perfect for birdwatching or horse racing enthusiasts.