How should be wizard fashion? By Lordddorian


Disclaimer: The following is just a massive headcanon. For the most part I don’t think it contradicts the books, but for the mostest part it’s just based on personal taste. Also, I’ll be focusing on traditional conservative wizard clothes, the kind that shun muggle influence at all costs. If you read the posts I linked above, there we talk a bit about other styles.

Okay, so I think that the basic thing here is that magic would free wizards from some concerns regarding clothing and material:

- Weight. (“You say you want to wear a massive cloak made of the heaviest brocade? And you want it to be all gathered and pleated and draped and bunched up so that you can use even more fabric?? Worry not, there’s probably a spell to make it light as a feather and floaty as cheesecloth.” I would say that such magics are worked during the process of manufacturing the fabric.)

- Dirt. (“Look at that lengthy train you’re dragging behind you all over this disgusting, dog-pissed, owl-pooped cobbled floor! It’s utterly filthy!!” – “Ahahah, ‘tis okay, one quick spell and it’ll be like brand new!”)

- Shape. (“This satin is too soft and won’t hold the shape I’m trying to give it T_T” ­­– “All is not lost my friend, you can spray it with this magic starch and you’ll be able to make it into a ginormous dragon!!!”)
Basically, what I’m trying to say is that witches and wizards have found the way to wear the most impractical crap you could ever imagine and still be able to move around and function in general.

I confess that my view of wizard clothes is very… cartoony? In regards to style, the overall look is an amalgam of medieval, baroque and Victorian fashion, but very stylised and exaggerated. I would say that the wizarding world that we see in the books is a bit like this. Practicality is quite often just thrown out of the window in favour of aesthetics (and general we-can-do-better-than-muggles stubbornness.) And this is not limited to clothing, but to absolutely everything. In my opinion, the wizarding world of the films (which I love) is a bit too grounded, a bit too serious and mechanical, while in my head it’s much more whimsical.

So in my version of wizarding clothes there’s, to start with, lots of volume and general puffiness. The more you want to show off how rich and magical you are, the most space you want to take, probably. Then there’s layers. Again, a matter of status: more layers = more enchanted fabric = more magic + more money. Also, asymmetry and imbalance, in an art-nouveau-pushed-WAY-too-far kind of way. Since you don’t have to worry about falling over because of MAGIC, then you might as well perch a ginormous explosion of ribbons and stuffed tropical birds on the right side of your hat, which is already tilted to the right because you’re so fashionable. And colour, colour is cool too. Like, we have iridescent shot silks that look one colour or another depending on the angle you look at it, so why wouldn’t wizards have fabric that changes colour with the weather or your mood? Also, moving embroidery. Embroidered flowers that shift with the sun and animals that run around (Umbridge has a couple of cute kittens on her collar that get excited when she’s being exceedingly cruel).

This is, of course, wizard clothes taken to the extreme. Some people wear simpler robes, others go utterly wild. One of the purposes of school uniforms (I think) is to even out some inequalities that may exist between the students (like how rich their family is), so it makes sense to keep them simple. And someone who is serious and strict with a no-nonsense attitude (say, Snape or McGonagall) would wear something like this: 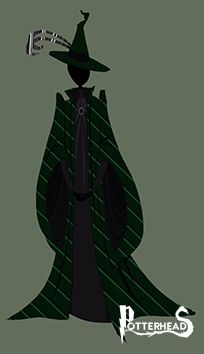 While Dumbledore, for instance, would go for something more regal: 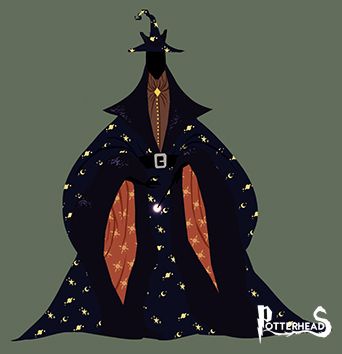 Then, of course, there’s our Umbridges and Lockharts: 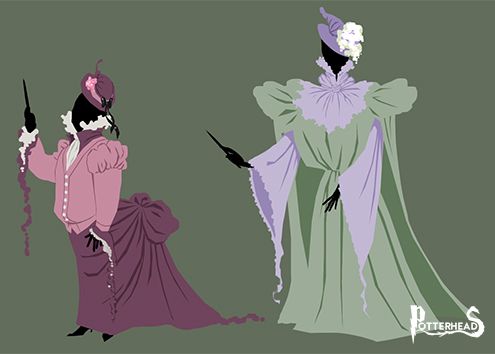 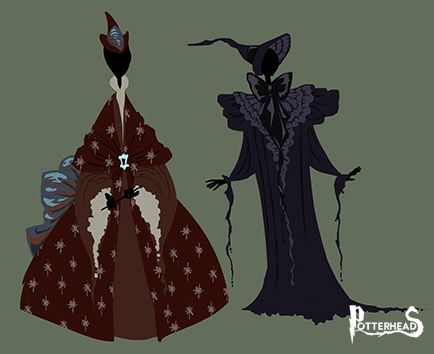 Do all of them look very feminine? Yass :D

And to finish with, an unfinished lil’ Quidditch player: 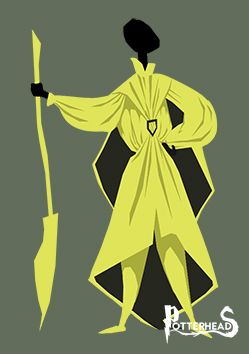